Its been a tough week. I have taken bigger losses but never a bigger percentage loss and in such fashion than the case with ARIA- 65% gap down.

I stayed very calm. It wasn’t the end of my account. It was a step back. It felt like a major step back. It was unfortunate. It was numbing.

I had been sitting on my hands so long through the volatility, to have the markets up over 2% two days later is almost worse than the ARIA experience. IBB has so far bounced at 192.

You try to see things as clear as possible, stay objective, then an event makes those efforts seem altogether very cloudy as the sun shines on everyone else.

I needed to process the experience. I looked through all the ARIA charts I had posted on StockTwits. Im just going to time line it and add thoughts.

I had been keyed into this stock a long while back it was shaking hard after long run higher. I knew they had promising cancer research going on. I didn’t want to rush in from a technical perspective which was my basis.

The trades were there but I was interested in the trend. It needed more time. 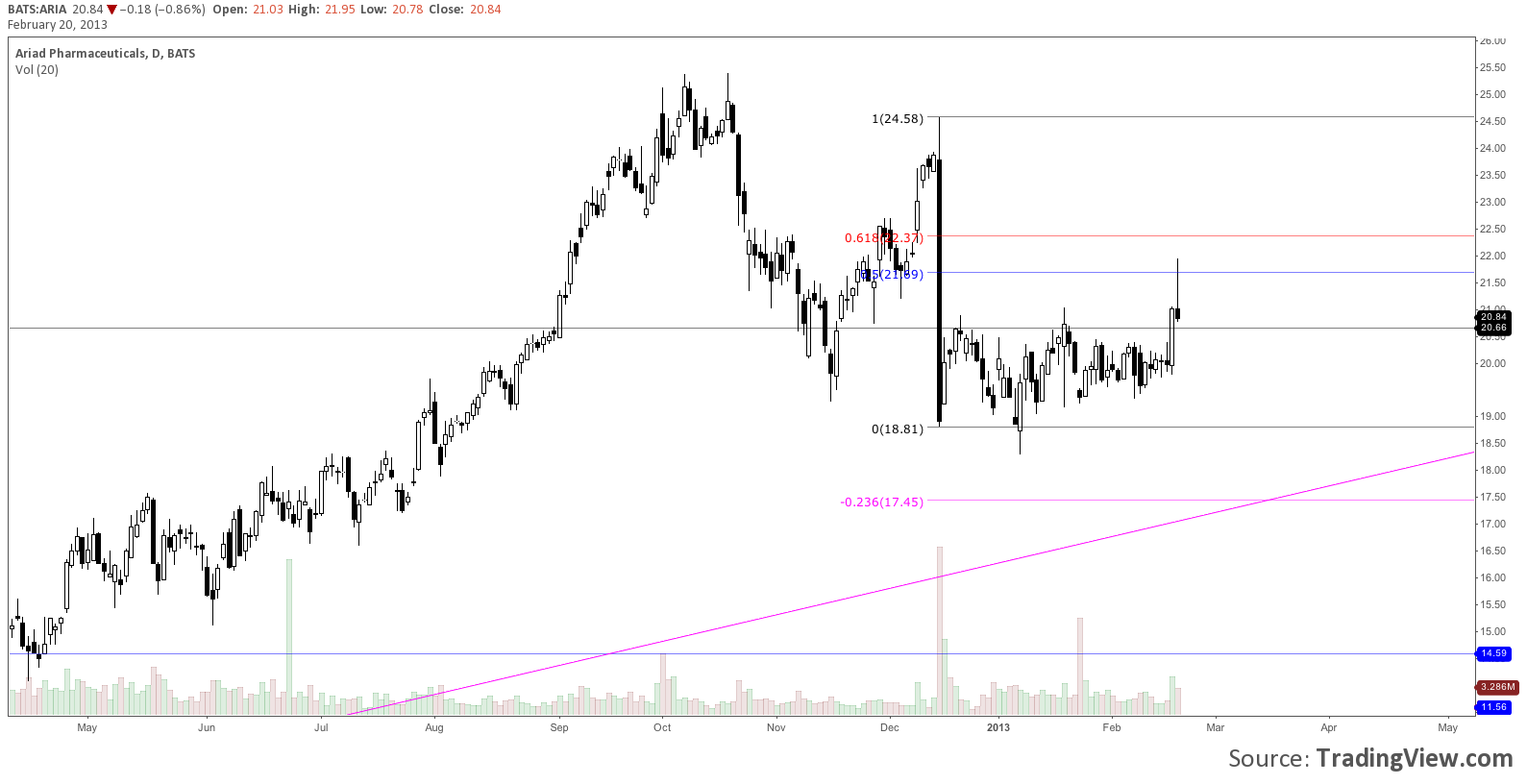 Around mid July ARIA started to flatten out and get above its EMAs and TLs, earnings was coming up and the monthly (which I don’t have a past shot of) was looking promising too. 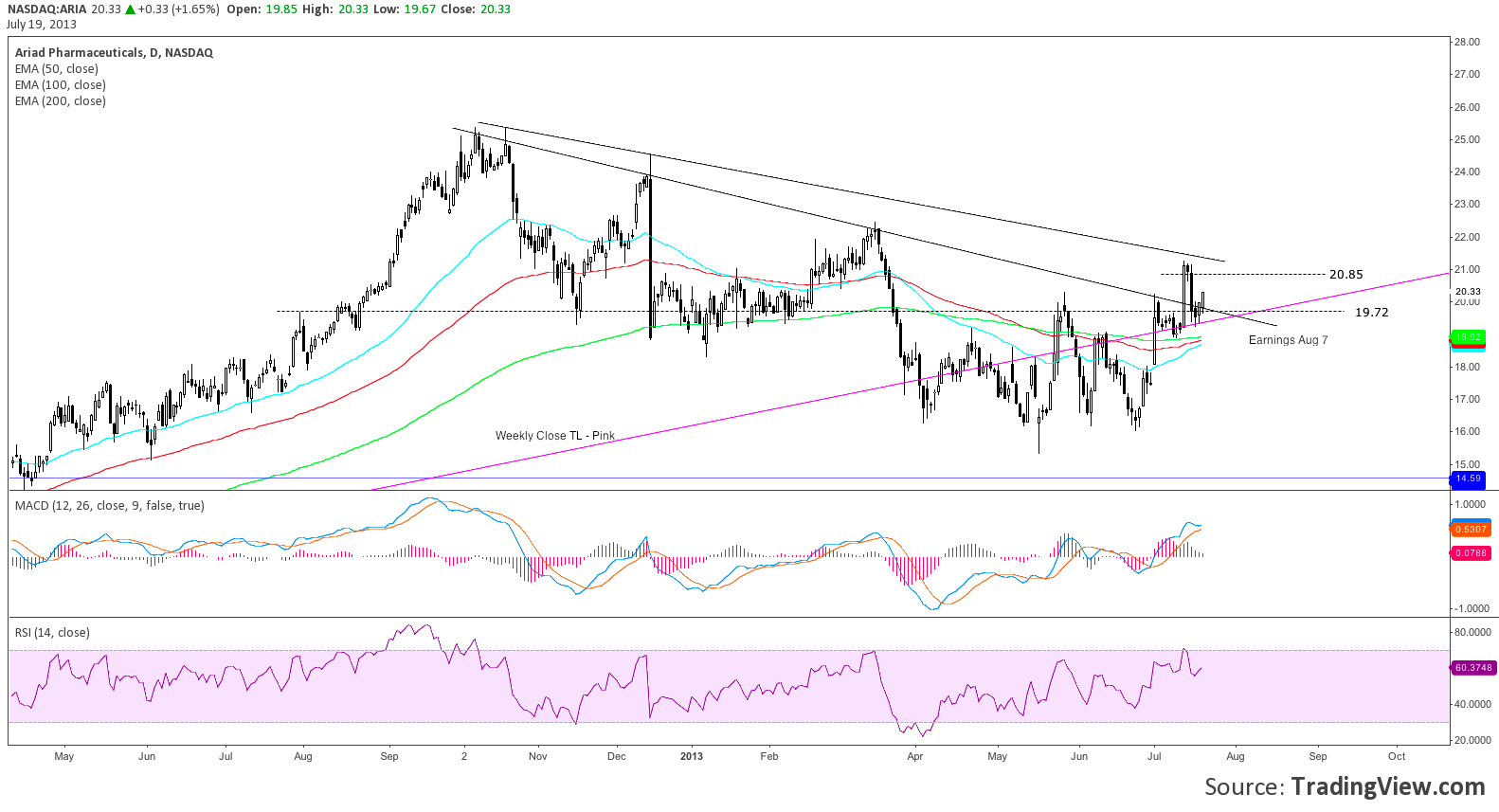 I waited for earnings to come and go, and waited for a test of prior lows. The stock began to flag above its EMAs and I took a position Aug 28 looking for continuation. It turned out to be a good entry, but the last gift I would receive. 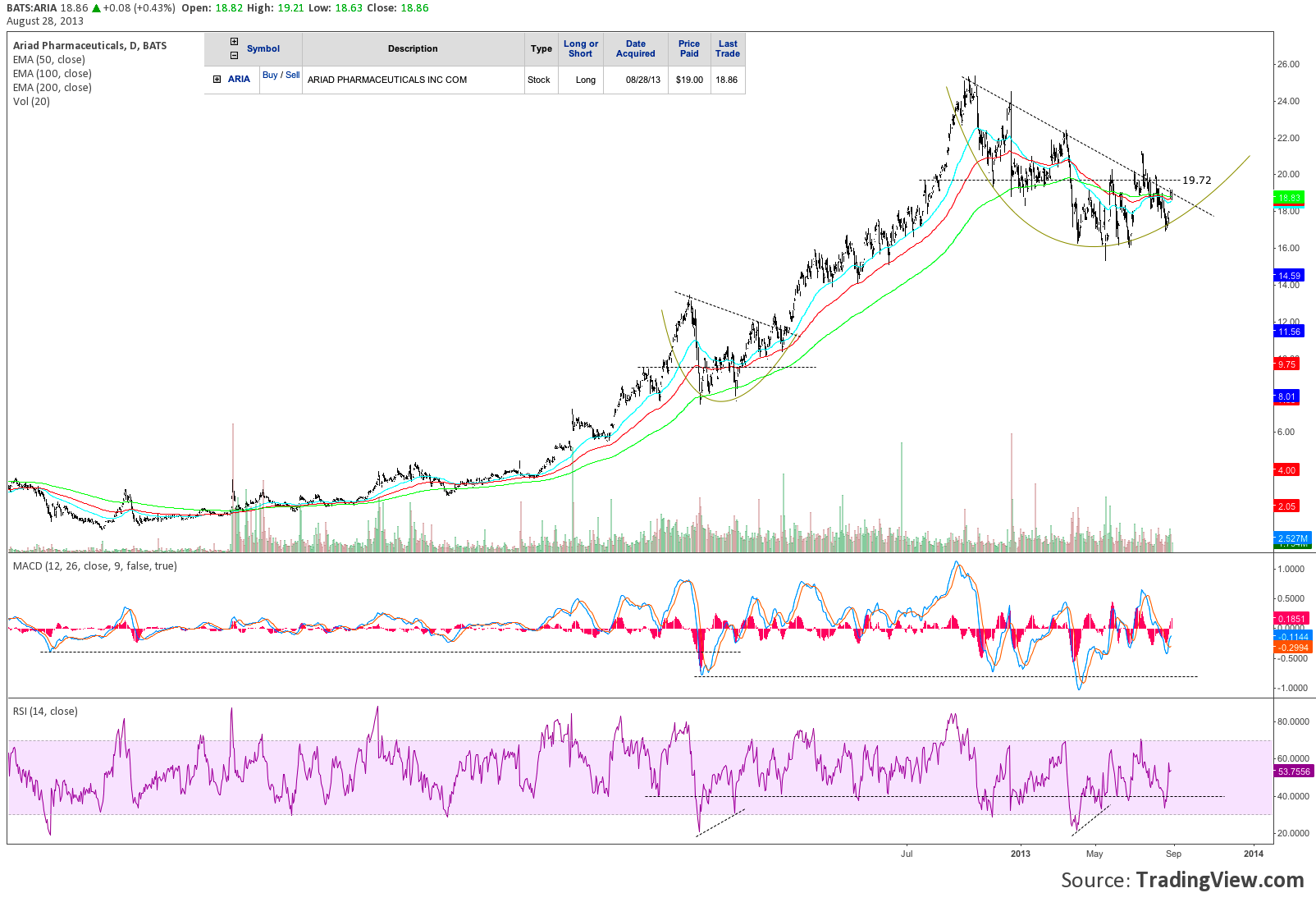 Next, the first instance of doubt enters. I don’t have a past chart grab but I’ll mark current one up. After a nice run higher towards 23 from my entry at 19, I see this at the 30min TF. 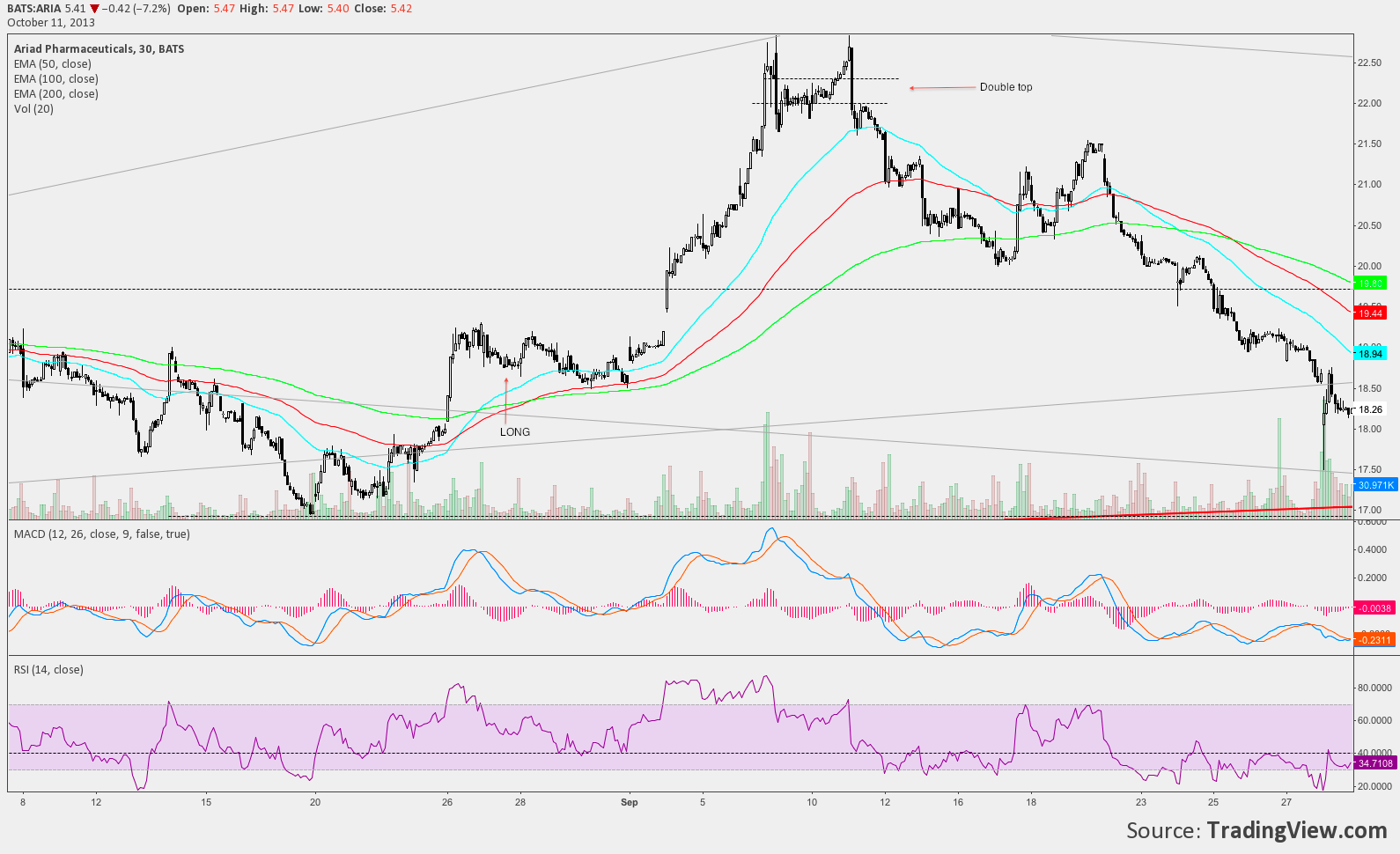 I remember saying to myself. Wow, if thats not a double top forming I don’t know what is. But I sat on my hands. I wanted to remain more focused on the long term trend. Thats why I was interested in the stock, thats why I had been so patient.

Adding to the weight I had on my hands, a couple times before I had been “cute” with positions and watched them run away.

Even after seeing a healthy pullback from the breakout I saw the setup for higher still possible mid September. 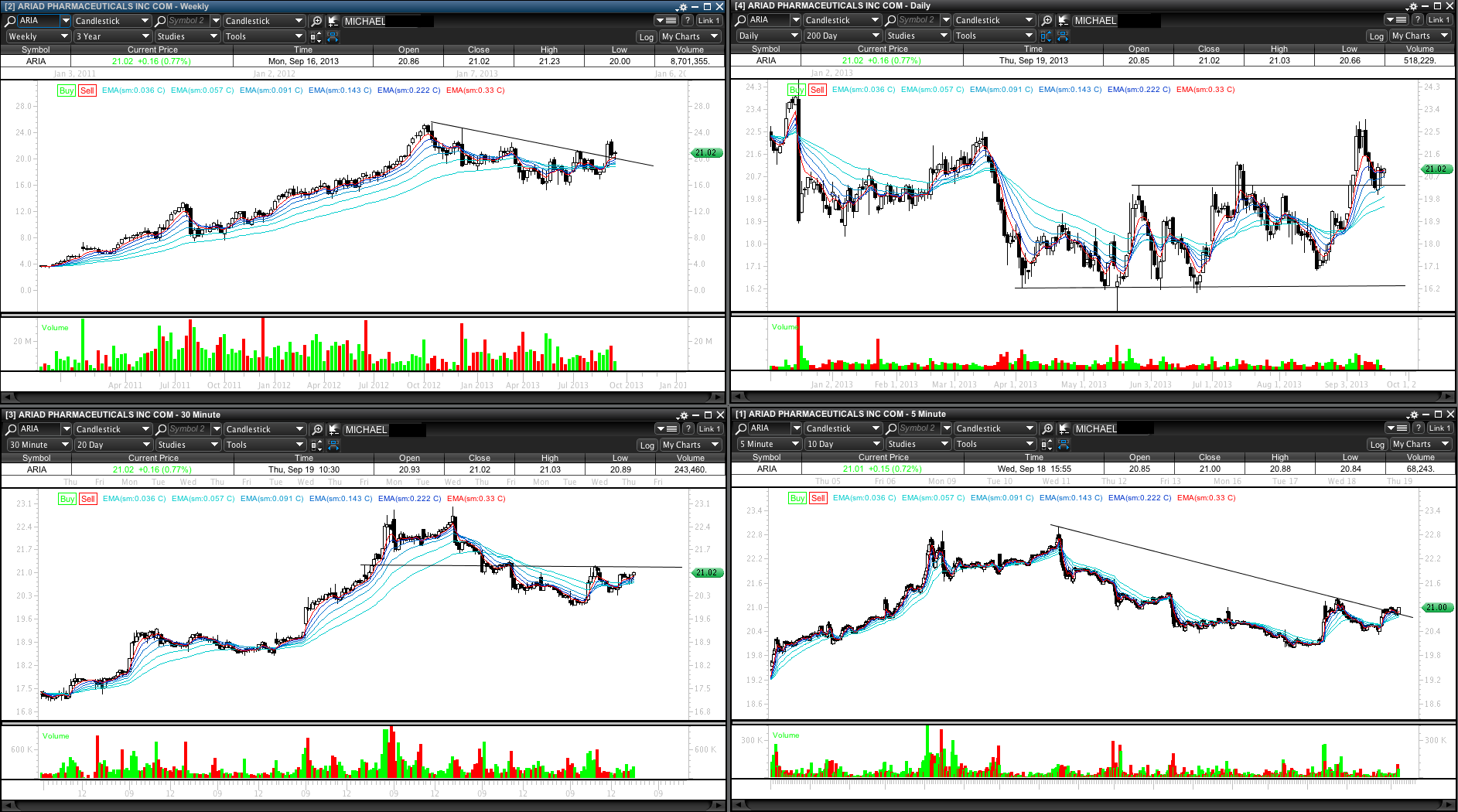 The support at my buy price quickly broke down however and I was left wondering if all I had been tracking was a trade. I considered the fact that the markets were getting increasingly volatile especially IBB, but that the trend was higher and support could be nearby. 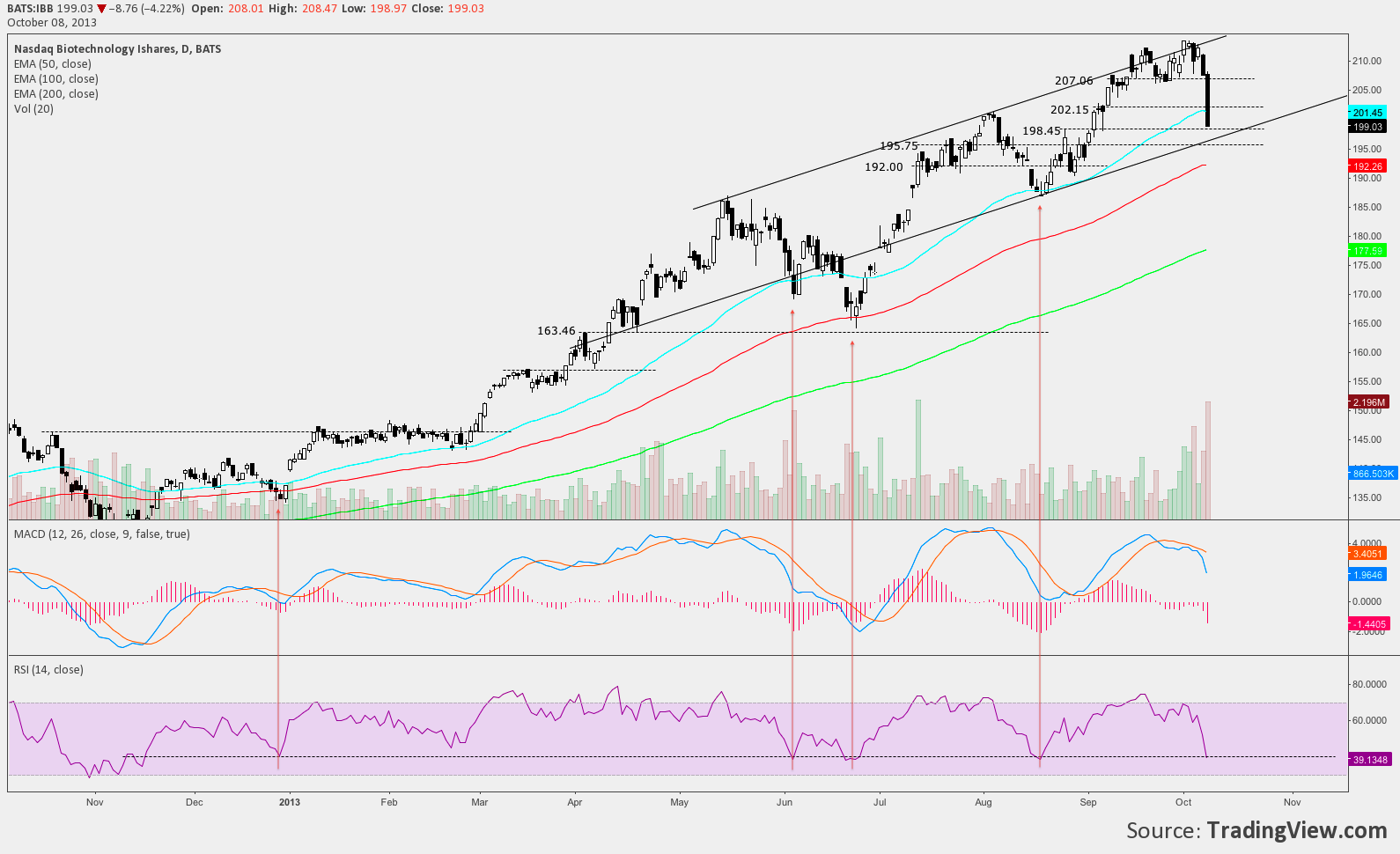 ARIA had not made a lower low at the daily pivot around 17 below my entry. It was still a two dollar risk in what I thought was a retracement of a longer TF. I believed that a lower low was the most elementary signal I could view through the noise in the markets during the government shutdown. I took another technical view of the chart using Andrews Pitchfork, but it wouldn’t matter. 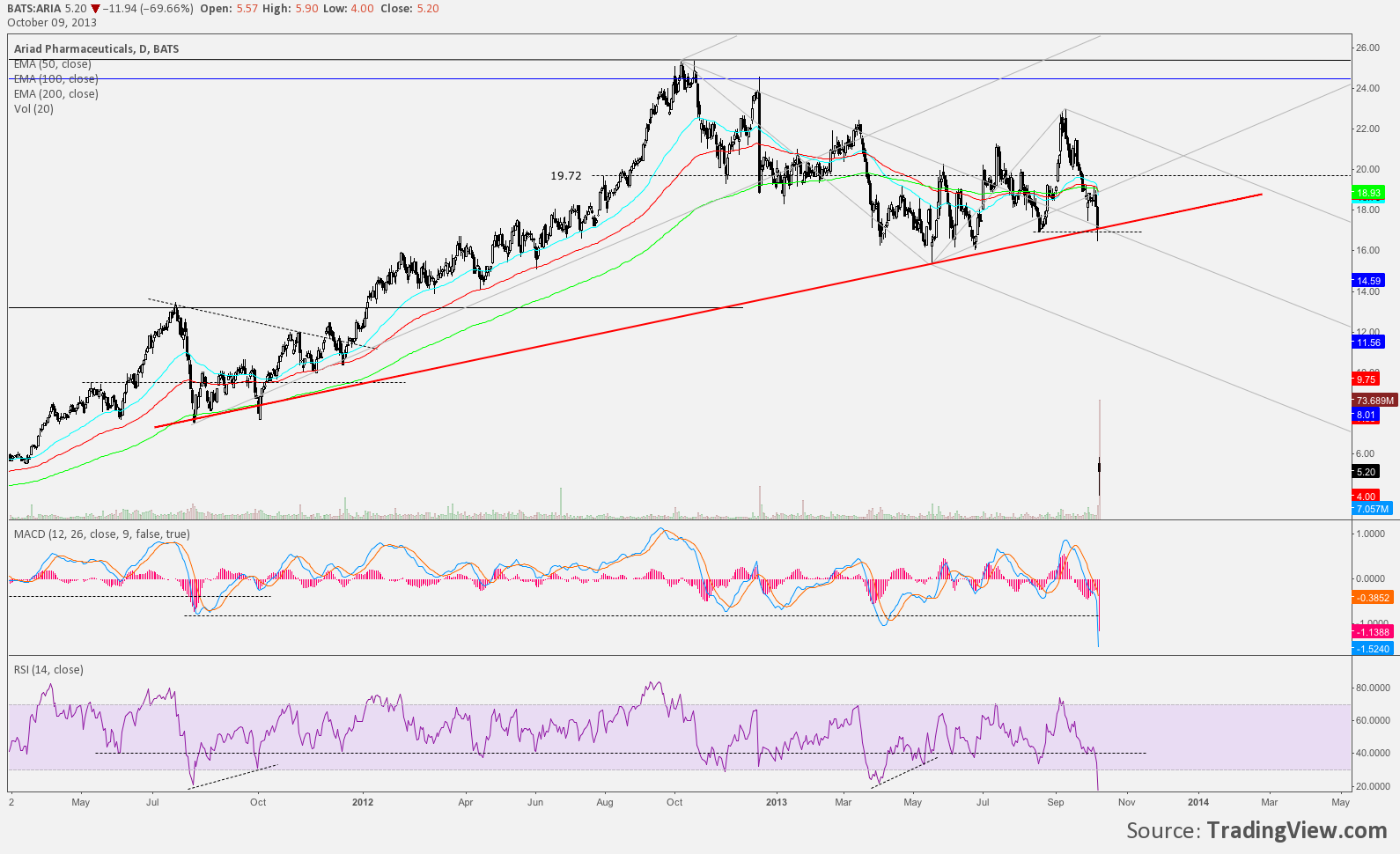 I was going to enter a market on close order considering I had been working on a daily close thesis, but I took my loss midday. I just needed to move on. I couldn’t look at it but I couldn’t look away and not looking away was hoping.

I Googled “biggest Nasdaq losers” and a piece of me came up in ARIA. It felt like the world was watching me, but I knew I was better than this feeling and was not running on hope.

If ARIA should rebound at any point I will feel no regret for taking my loss. None. I am shook a little. I am human, physically and mentally worn by it for the moment but it does not own me and the many more important things in life.

I took some other positions off relative to the outcome of this trade and not necessarily their own. Maybe that was wrong, I was probably trying to hide from making more mistakes which are inevitable, but felt I needed less decisions around me.

There’s more details within the price and volume to think of. I need to keep learning, and I still have the opportunity to do so.