A couple positions Im currently in.

NBR was disclosed prior and doing ok but has been a rough ride of late. MUR was not disclosed, and currently has a better chart.

First off, NBR. I had been looking at chart since January.

Turned out to be a good entry. I remember stating a long while back that I thought NBR was well behaved. Not in the least of late.

NBR had made a great move higher since my entry but the pullback after the weekly breakout has been very difficult to sit/hold through. Im using a stop below 16. 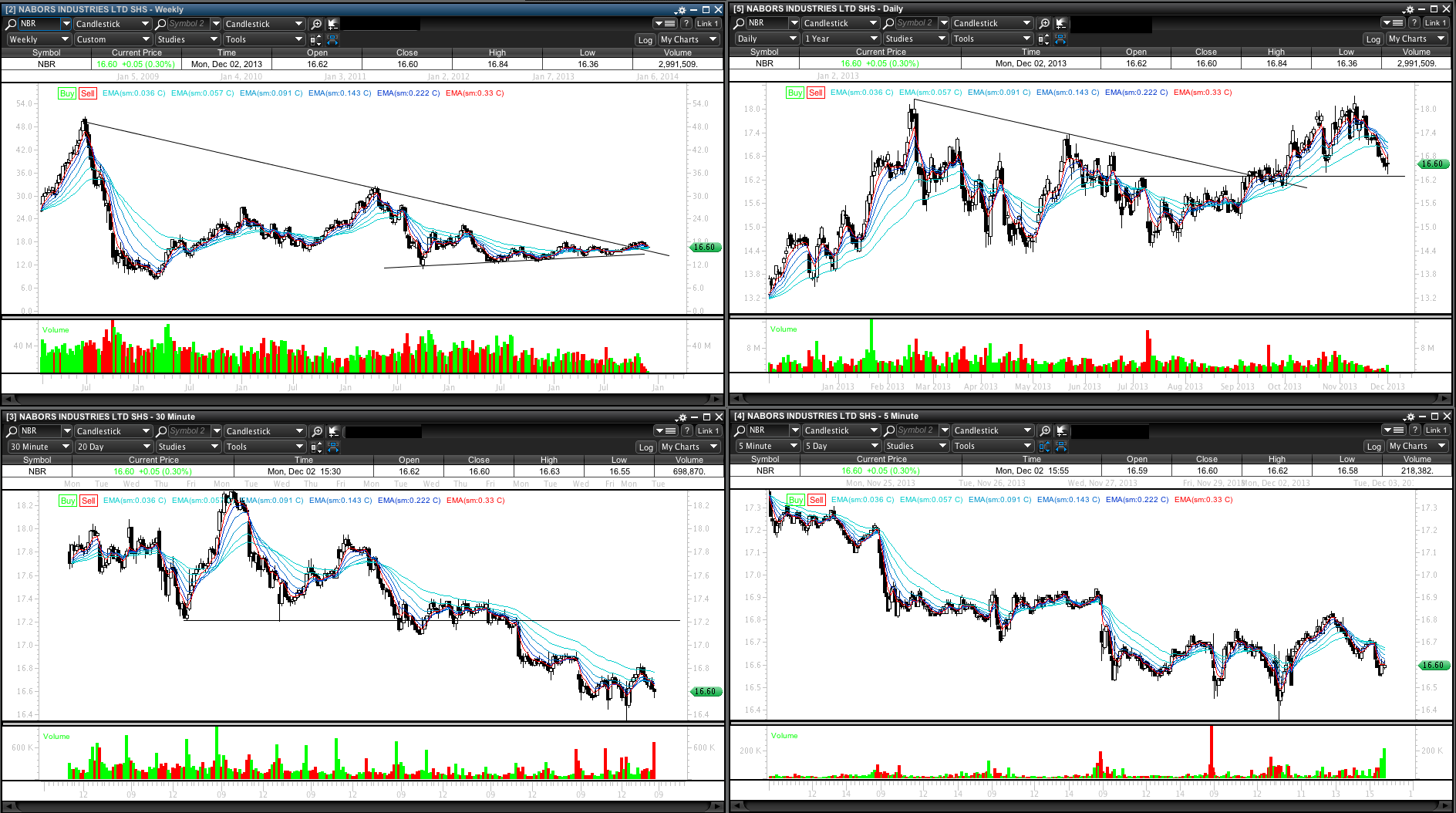 Without a close below the 16.00 swing low level there could still be a bullish trend beginning here. Whether I timed it or not is still very debatable with the current unsettling price action. 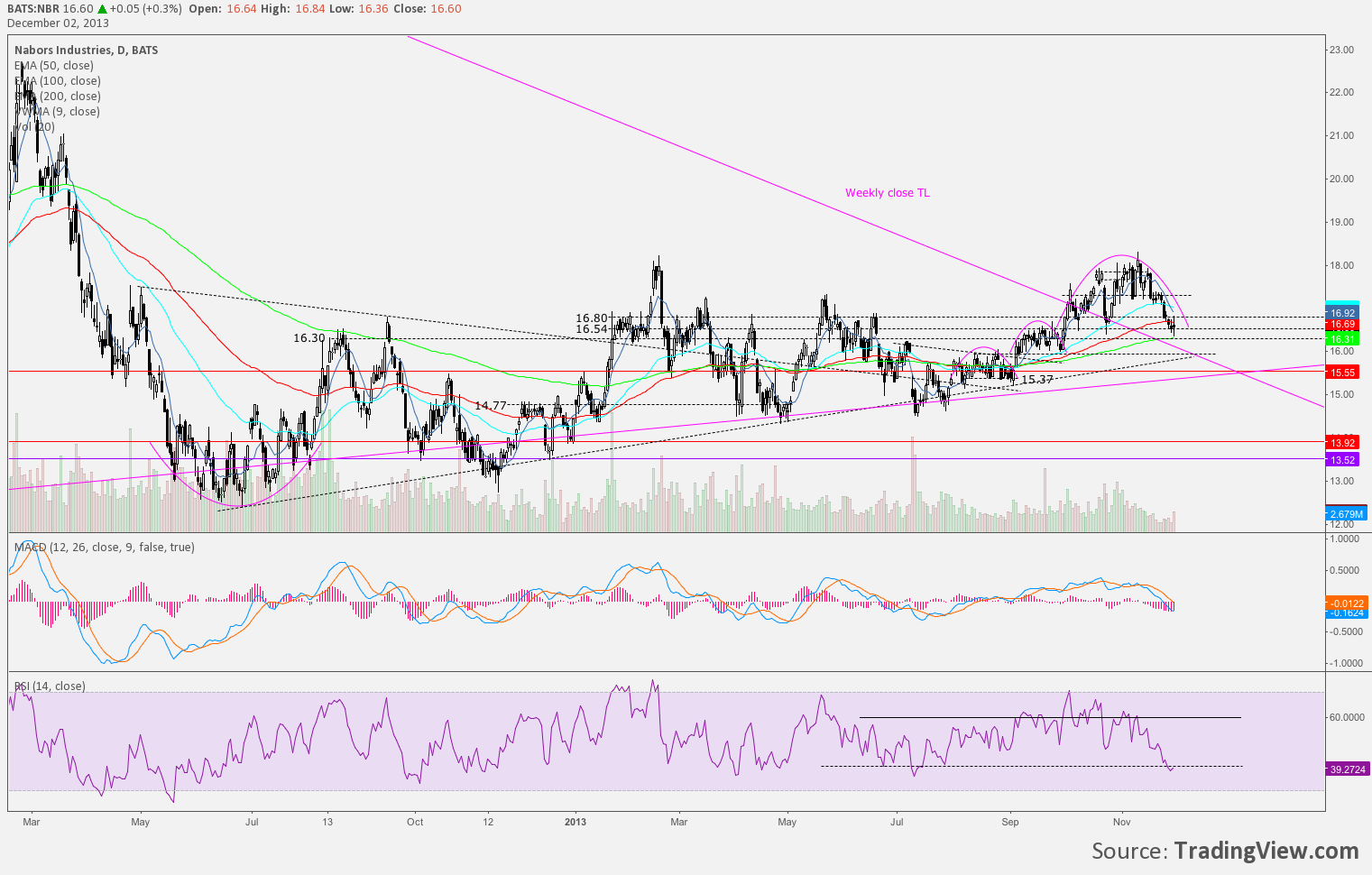 Next is MUR. Not disclosed but on my watch list and charted at times, particularly after the gap down to weekly levels mentioned below.

I do have a chart screen grab of my entry the day after based off the above thesis of support resistance level. If it hadn’t pulled back a second time I probably would have felt like chasing was the wrong move. 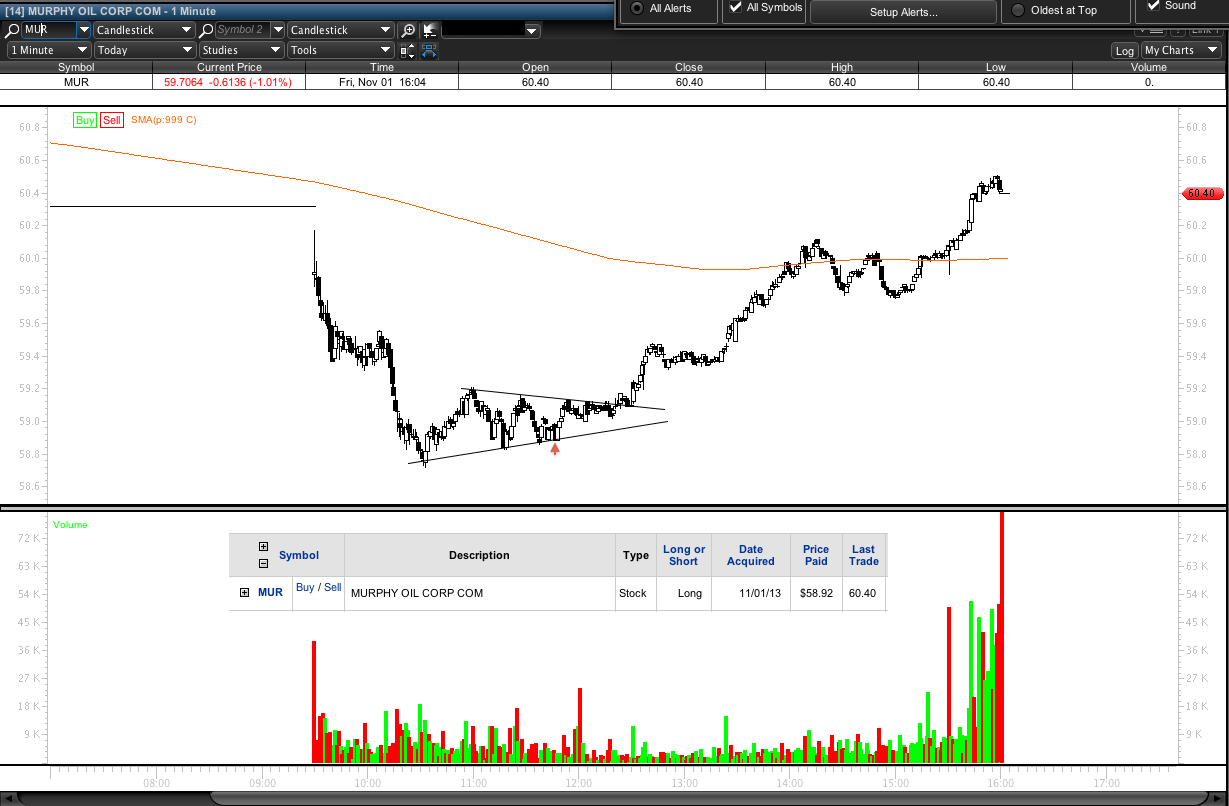 Ive liked the longer term look as it is breaking out on weekly and monthly time frames. When the gap down occurred it was an opportunity to look closer at the chart and get a good risk reward entry to a longer term chart with little damage.

If the monthly chart keeps getting prettier. I think MUR could see 80s pretty soon.

Todays chart looks extended into prior gap resistance. This will be a hard position to manage as well. 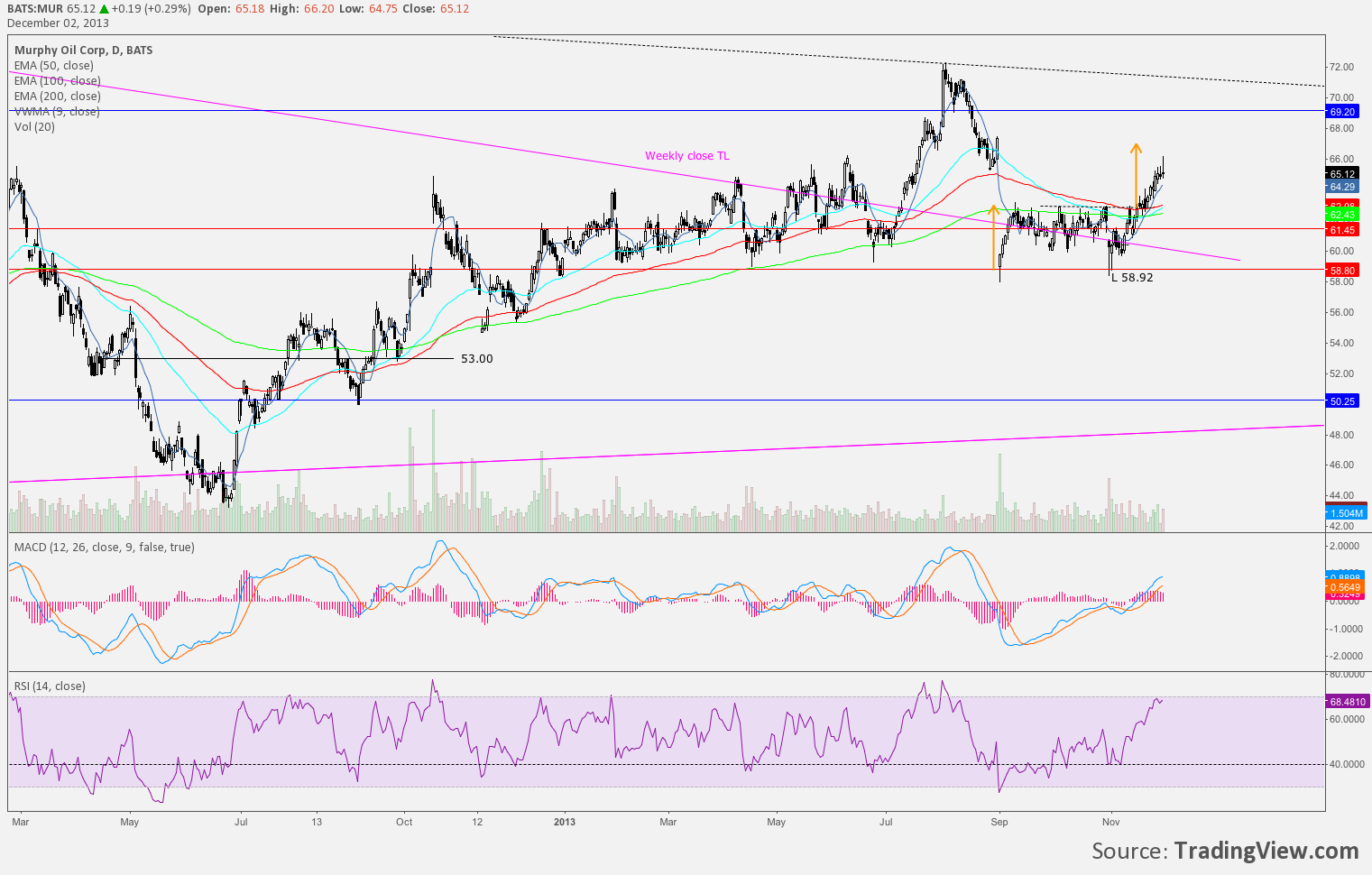 The OIH is at similar precarious level to short term trend, but with measured move to 55 possible. 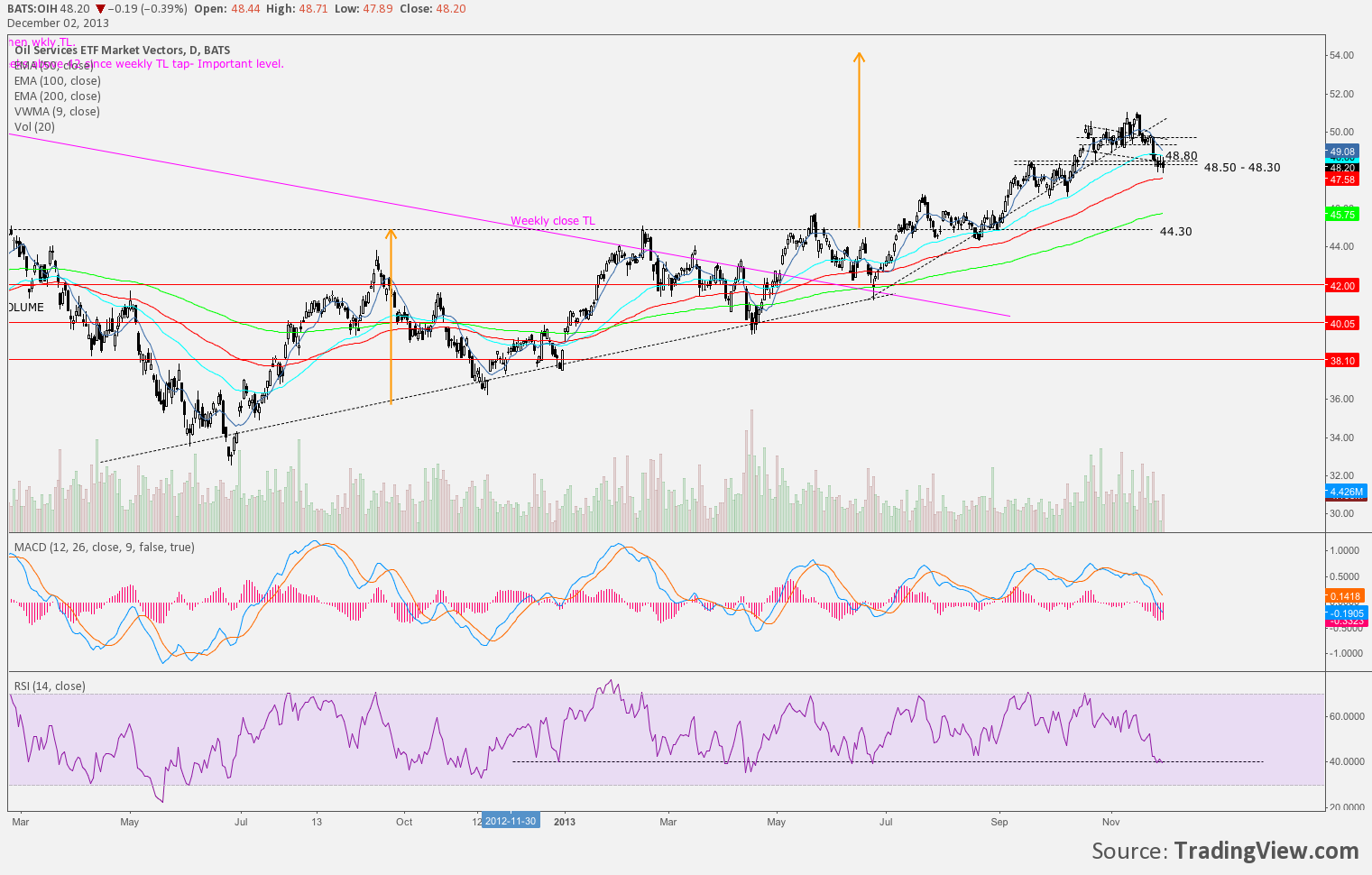 Oil could be carving out a low in the 90’s for a turn or just continue lower. I have pointed out a bullish case for natural gas, UNG.

An aside– This particular time in the overall market, and perhaps these positions for better or worse, has really made example to me the importance of slowing down the way I look for the moment of opportunity. Every trade/position is different and can morph from our point of reference, but it is nice to feel the market has been teaching me.

Further to that regard I have been trying to play position trader here with wider stops and longer term views, something I’m not completely certain both of these stocks are worthy of. On the one hand MUR is acting volatile but is near highs and the monthly is bullish. On the other, NBR is more of a bottoming play than a trend- something Im more familiar with initial timing of but not necessarily holding.